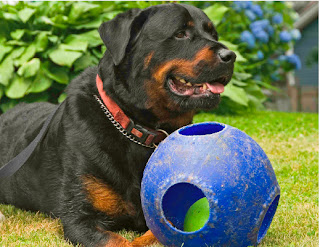 Sometimes, you just hit the jackpot, as we did when we placed Sid just over a year ago.

Sid is a beautiful Rottweiler with an undocked tail and funny whiskers on his chin. He's a joy to just look at, with a huge smile and enormous brown eyes - eyes that are now filled with the comfort and satisfaction that he's safe and loved. But his story is quite sad - those eyes used to be filled with fear - as he came to us literally a broken and dejected dog.

Sid came to PAWS both physically and psychologically scarred from the abuse he suffered at the hands of a true animal, the "human" who severely beat him with what we think was a baseball bat. This abuse left Sid with permanent injuries to his hind quarters. He also suffered from psychological injuries which caused him to lose the confidence he needed to be a great companion.

This majestic dog spent a year at PAWS being rehabilitated physically and behaviorally. Annie, one of our incredible volunteer/trainers, worked endless hours with Sid, rebuilding his confidence and physical strength. She taught others how to work with him, brought Sid home to meet her dogs, and introduced him to men - one of Sid's real fears. 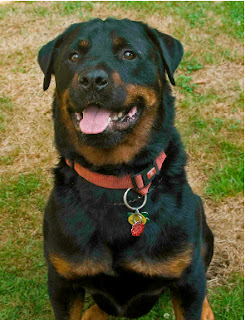 PAWS received dozens of calls from people who wanted to adopt Sid. After all, he's a gorgeous guy! A beautiful Rottie who was looking for a home. But Sid couldn't go to just any home, he needed a special one, with people who were dedicated to continuing his structured training and ensuring that he had a good, safe life ahead of him.

It took time, but eventually Sid met his new parents, fantastic people who - I'll venture to say - are head-over-heels in love with him! Look at these photos. These are the best folks in the world. They've made such a great life for Sid and I have a feeling Sid has added a bit to their lives as well.